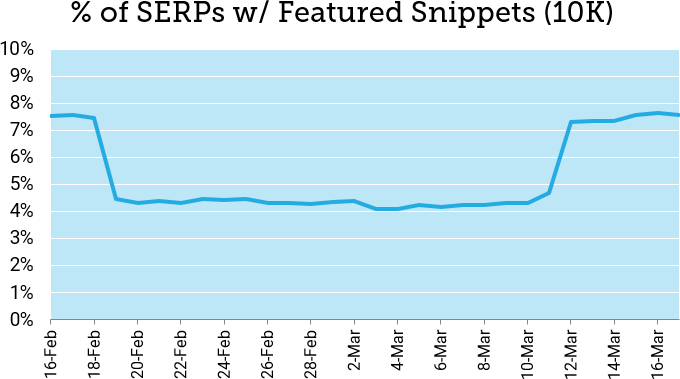 On February 19, 2021, we measured a dramatic drop in Featured Snippets on Google SERPs in the US. Like any responsible data scientist, I waited to make sure it wasn’t a fluke, did my homework, and published when I was sure I was onto something. Then, this happened (30-day view):

C’MON, GOOGLE! I did all these beautiful analyses, found a lovely connection between Featured Snippet losses, YMYL queries, and head terms, and then you go and make me look like a chump?!

Is there anything we can learn from this strange turn of events? Do I really need this stress? Should I just go pour myself a cocktail? Stay tuned for none of these answers and more!

Could this recovery be a fluke of the 10,000-keyword MozCast data set? It’s unlikely, but let’s dot our i’s and cross our t’s. Here’s the Featured Snippet data from the same time period across roughly 2.2M US/desktop keywords in the STAT data set:

So, this gets a lot messier. We saw a significant drop on February 19, followed by a partial recovery, followed by an even larger drop, finally landing (for now) on a total recovery.

Our original study of the drop showed dramatic differences by query length. Here’s a breakdown by four word-count buckets for the before and after Featured Snippet prevalence (the data points are February 18, February 19, and March 12):

You can plainly see that the bulk of the losses were in one-word queries, with longer queries showing minor but far less dramatic drops. All query lengths recovered by March 12.

Who really came back from holiday?

If you take two kids on vacation and come back with two kids, it’s all good, right? What if the kids who came back weren’t the same? What if they were robots? Or clones? Or robot clones?

Is it possible that the pages that were awarded Featured Snippets after the recovery were different from the ones from before the drop? A simple count doesn’t tell us the whole story, even if we slice-and-dice it. This turns out to be a complicated problem. First of all, we have to consider that — in addition to the URL of the Featured Snippet changing — a keyword could gain or lose a Featured Snippet entirely. Consider this comparison of pre-drop and post-recovery:

That seems like a big drop, but we also have to consider that three weeks (22 days, to be precise) passed between the drop and recovery. How much change is normal for three weeks? For comparison’s sake, let’s look at the Featured Snippet stability for the 22 days prior to the drop:

While these numbers are a bit better than the post-recovery numbers, we’re still seeing about three out of 10 keywords either losing a Featured Snippet or changing the Featured Snippet URL. Keep in mind that Featured Snippets are pulled directly from page-one organic results, so they’re constantly in flux as the algorithm and the content of the web evolve.

It’s impossible to say whether the original drop was deliberate on Google’s part, an unintentional consequence of another (deliberate) change, or entirely a bug. Honestly, given the focus of the drop on so-called “head” queries and YMYL (Your Money, Your Life) queries, I thought this was a deliberate change that was here to stay. Without knowing why so many Featured Snippets went away, I can’t tell you why they came back, and I can’t tell you how long to expect them to stay around.

What we can assume is that Google will continue to evaluate Featured Snippet quality, especially for queries where result quality is critical (including YMYL queries) or where Google displays Knowledge Panels and other curated information. Nothing is guaranteed, and no tactic is future-proof. We can only continue to measure and adapt.