Aren’t 301s, 302s, and Canonicals All Basically the Same? – Best of Whiteboard Friday 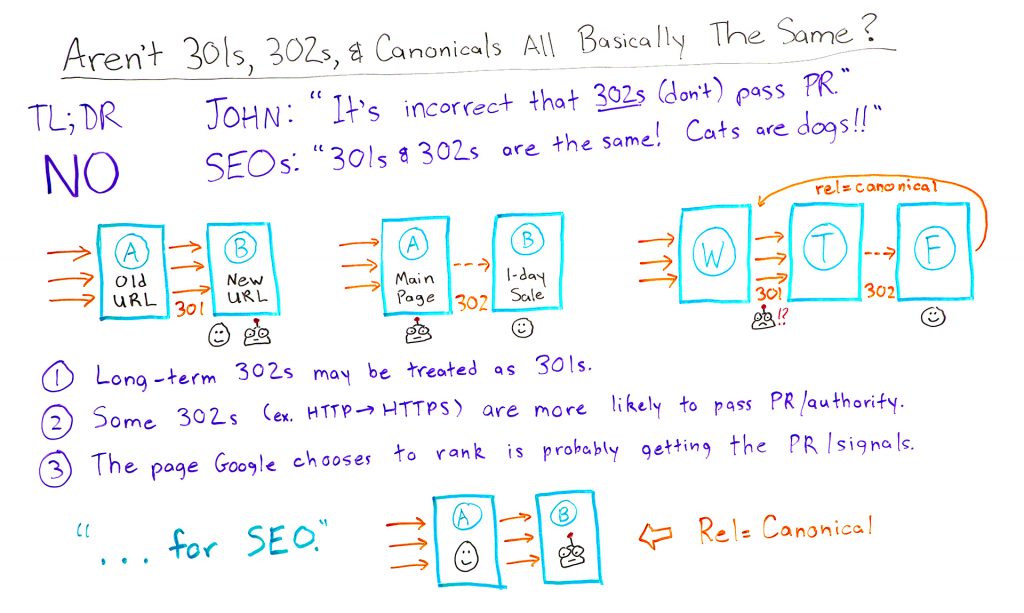 They say history repeats itself. In the case of the great 301 vs 302 vs rel=canonical debate, it repeats itself about every three months. And in the case of this Whiteboard Friday, it repeats once every two years as we revisit a still-relevant topic in SEO and re-release an episode that’s highly popular to this day. Join Dr. Pete as he explains how bots and humans experience pages differently depending on which solution you use, why it matters, and how each choice may be treated by Google.

Hey, Moz fans, it’s Dr. Pete, your friendly neighborhood marketing scientist here at Moz, and I want to talk today about an issue that comes up probably about every three months since the beginning of SEO history. It’s a question that looks something like this: Aren’t 301s, 302s, and canonicals all basically the same?

So if you’re busy and you need the short answer, it’s, “No, they’re not.” But you may want the more nuanced approach. This popped up again about a week [month] ago, because John Mueller on the Webmaster Team at Google had posted about redirection for secure sites, and in it someone had said, “Oh, wait, 302s don’t pass PageRank.”

John said, “No. That’s a myth. It’s incorrect that 302s don’t pass PR,” which is a very short answer to a very long, technical question. So SEOs, of course, jumped on that, and it turned into, “301s and 302s are the same, cats are dogs, cakes are pie, up is down.” We all did our freakout that happens four times a year.

So I want to get into why this is a difficult question, why these things are important, why they are different, and why they’re different not just from a technical SEO perspective, but from the intent and why that matters.

I’ve talked to John a little bit. I’m not going to put words in his mouth, but I think 95% of this will be approved, and if you want to ask him, that’s okay afterwards too.

Why is this such a difficult question?

So let’s talk a little bit about classic 301, 302. So a 301 redirect situation is what we call a permanent redirect. What we’re trying to accomplish is something like this. We have an old URL, URL A, and let’s say for example a couple years ago Moz moved our entire site from seomoz.org to moz.com. That was a permanent change, and so we wanted to tell Google two things and all bots and browsers:

So people and bots should both end up on this new page.

A classic 302 situation is something like a one-day sale. So what we’re saying is for some reason we have this main page with the product. We can’t put the sale information on that page. We need a new URL. Maybe it’s our CMS, maybe it’s a political thing, doesn’t matter. So we want to do a 302, a temporary redirect that says, “Hey, you know what? All the signals, all the ranking signals, the PR, for Google’s sake keep the old page. That’s the main one. But send people to this other page just for a couple of days, and then we’re going to take that away.”

So these do two different things. One of these tells the bots, “Hey, this is the new home,” and the other one tells it, “Hey, stick around here. This is going to come back, but we want people to see the new thing.”

So I think sometimes Google interprets our meaning and can change things around, and we get frustrated because we go, “Why are they doing that? Why don’t they just listen to our signals?”

Why are these differentiations important?

The problem is this. In the real world, we end up with things like this, we have page W that 301s to page T that 302s to page F and page F rel=canonicals back to page W, and Google reads this and says, “W, T, F.” What do we do?

We sent bad signals. We’ve done something that just doesn’t make sense, and Google is forced to interpret us, and that’s a very difficult thing. We do a lot of strange things. We’ll set up 302s because that’s what’s in our CMS, that’s what’s easy in an Apache rewrite file. We forget to change it to a 301. Our devs don’t know the difference, and so we end up with a lot of ambiguous situations, a lot of mixed signals, and Google is trying to help us. Sometimes they don’t help us very well, but they just run into these problems a lot.

In this case, the bots have no idea where to go. The people are going to end up on that last page, but the bots are going to have to choose, and they’re probably going to choose badly because our intent isn’t clear.

So there are a couple situations I want to cover, because I think they’re fairly common and I want to show that this is complex. Google can interpret, but there are some reasons and there’s some rhyme or reason.

So the first one is that long-term 302s are probably going to be treated as 301s. They don’t make any sense. If you set up a 302 and you leave it for six months, Google is going to look at that and say, “You know what? I think you meant this to be permanent and you made a mistake. We’re going to pass ranking signals, and we’re going to send people to page B.” I think that generally makes sense.

Some types of 302s just don’t make sense at all. So if you’re migrating from non-secure to secure, from HTTP to HTTPS and you set up a 302, that’s a signal that doesn’t quite make sense. Why would you temporarily migrate? This is probably a permanent choice, and so in that case, and this is actually what John was addressing in this post originally, in that case Google is probably going to look at that and say, “You know what? I think you meant 301s here,” and they’re going to pass signals to the secure version. We know they prefer that anyway, so they’re going to make that choice for you.

So if you have a case like this, a 302, and you leave it up permanently and you start to see that Page B is the one that’s being indexed and ranking, then Page B is probably the one that’s getting the ranking signals. So Google has interpreted this as a 301. If you leave a 302 up for six months and you see that Google is still taking people to Page A, then Page A is probably where the ranking signals are going.

So that can give you an indicator of what their decision is. It’s a little hard to reverse that. But if you’ve left a 302 in place for six months, then I think you have to ask yourself, “What was my intent? What am I trying to accomplish here?”

Part of the problem with this is that when we ask this question, “Aren’t 302s, 301s, canonicals all basically the same?” what we’re really implying is, “Aren’t they the same for SEO?” I think this is a legitimate but very dangerous question, because, yes, we need to know how the signals are passed and, yes, Google may pass ranking signals through any of these things. But for people they’re very different, and this is important.

2. Rel=canonical is for bots, not people.

So I want to talk about rel=canonical briefly because rel=canonical is a bit different. We have Page A and Page B again, and we’re going to canonical from Page A to Page B. What we’re basically saying with this is, “Look, I want you, the bots, to consider Page B to be the main page. You know, for some reason I have to have these near duplicates. I have to have these other copies. But this is the main one. This is what I want to rank. But I want people to stay on Page A.”

So take it from a user perspective. I have had in Q&A all the time people say, “Well, I’ve heard that rel=canonical passes ranking signals. Which should I choose? Should I choose that or 301? What’s better for SEO?”

Why this matters, both for bots and for people

So I just want you to keep in mind, when you look at these three things, it’s true that 302s can pass PR. But if you’re in a situation where you want a permanent redirect, you want people to go to Page B, you want bots to go to Page B, you want Page B to rank, use the right signal. Don’t confuse Google. They may make bad choices. Some of your 302s may be treated as 301s. It doesn’t make them the same, and a rel=canonical is a very, very different situation that essentially leaves people behind and sends bots ahead.

So I hope that makes sense. If you have any questions or comments or you’ve seen anything weird actually happen on Google, please let us know and I’ll be happy to address that. And until then, we’ll see you next week.